OK so bear in mind I had a major fat kid vacation so my healthier habits basically went into the toilet.  As a result I’m making a conscious effort to do a little better.  One of those things would be to consume more water, I’m tired of feeling lethargic and dehydrated.  So this is a good thing, having to pee all the time, not so much.  As a result of this, this conversation happened today at work.

Me: Good lord, I need to pee again!

Co-worker: Happens to people who are pregnant.

C0-worker: Sure it is, my friend got pregnant and she was on the pill.

Me: (laughing) No (insert co-workers name here), I can’t get pregnant because I don’t have anyone to have sex with.

We both had a good laugh over the whole thing.  Maybe you just had to be there?

I have an android smart phone.  I have to say, it’s pretty awesome and has come in handy on more then one occasion.  Although I refuse to be one of those people who is constantly on their phone updating their shit.  I have better things to do with my time.  I’m also pretty careless with where I leave it sometimes.

Maybe I just don’t want to be found?

Anyway the website DYAC (damn you auto correct)  is usually full of win.  While I don’t have an iphone (so I can’t screen shot them) I still have that somewhat irritating although occasionally entertaining predictive text/auto correct feature on my phone.  Sometime’s it’s just because I’m drunk…  In any case, I can always e-mail the convo’s and sometimes they have merit.  This is one of those times.

My favorite: Between Adam & I:

Where do you live now?
Near Montreal pussy station.
Is that a new strip club?
Ha ha what? No. Oh fucking phone.  No Montreal Ouest, as in the train station.  There is however a strip club up the street.

Between Wayne (my gay boyfriend) & I.  I was trying to convince him to come out to the bar :
Shit sidelines looks busy now lol or is that the whole bar outside lol/
Nope it’s Busty. I mean busy lol. (Every time I went to type in BUSY, it would auto correct it to Busty)
You are busty lol.
Lol yeah I know
ha ha.
Babe you still awake? come see mrerree!
I am not going out I am hun hunny sorry lol.
I’m sure you are babe but what does the size of your cock have to do with anything? 😉
Not my cock omg hungover helllooooooooo omg lololol. And I am not hung lmfao bahhaha.
That’s not what I heard.

Same night, between Amy & I (I was well on my way at this point, thank God Amy’s a teacher and clearly speaks drunkennease too):
Is it busy and where abouts r u sitting?
It’s busty enough and were buy the frontal.
Near where we were yesterday?
Yeah but closer to the stage, my mom’s preggers spot (was supposed to say preferred).
Ok. Ryan says he knows where u are.
Lol K. Dandra’s here (my sister Sandra) 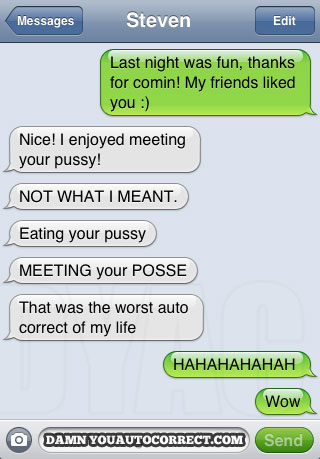 So I’m in Cambridge, ON for the holidays.  I was born here, most of my family still resides here so of course when Christmas rolls around I make the obligatory trip home.  Which never ceases to amuse me more often then not.  The vast differences between Cambridge and Montreal are huge.  Cambridge has a population of about 130,000 vs Montreal which has a population of  1,620,693 as of the 2006 census.  You’re likely wondering why this matters…  Let alone what the hell this has to do with Medusa.

I’ll tell you why…

When I walk the streets of Montreal, I seem to ‘blend in’ more.  It’s a larger city, which is also a lot more open minded then my hometown, which seems to be on occasion, still stuck in the dark ages.  So the other night when I was at a local bar with some friends, standing outside.  I happened to grab the attention of someone and he took one look at my face and zeroed in on my Medusa piercing.  The rapt, childlike fascination he had with my piercing was pretty priceless (I’m going to assume he was also pretty drunk)   He said something to the effect of: “Holy fuck, don’t tell me that’s pierced for real!?!” ‘Yes, it most certainly is.’  “Wow!  That must of hurt?” Your damn right it did (most painful piercing I have to date as a matter of fact)’ “Wow! That’s crazy.  Oh my God, you have your tongue pierced too? wow!”  “You must be crazy!?!” Me: With the most diabolical, sinister look on my face that I could muster (think Jack Nicholson in the Shining) ; looked at him dead on and said: “Why yes, yes I am”.

The look on his face was so precious it was priceless!  He looked frightened ha ha!  He looked at me on last time with that same awe struck look on his face and said “wow, I should stay away from you!!” Enter creeper face  and I said: “Yes, yes you should.” He looked so terrified I thought he was going to wet his pants!  He hightailed it back into the bar so fast and I’m pretty sure he left soon after that.

Amy & I got a good laugh out of that one!  That’s the beautiful thing about being on vacation, even if it’s just in your hometown.  You don’t live here, so it doesn’t matter what you do or how much you mess with drunk people (within reason of course, I don’t set out to be malicious in any way) it can be pretty entertaining.

It’s a shame that it wasn’t summer or at the very least warm enough to warrant showing this off: 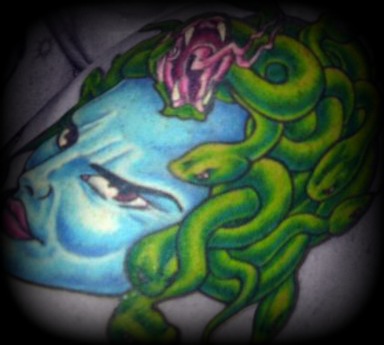 She tends to freak people out.  Medusa is pretty awesome all around mind you.  Too bad I didn’t posses the ability to turn people into stone.  Not all the time mind you, just on occasion. I’m thinking that would come in handy someday. No?

I have the most ridiculously random, yet totally awesome life EVER!

I hosted a day long fundraiser at my place yesterday to help out a friend.  Started at 9am and ran until some obscure hour in the wee hours of the morning.  It was by and large one of the Best. Saturday’s. Ever.  It started out innocently enough, get up, get stuff done.  Or so that was the plan at the very least.

So for those of you who missed it, here’s the highlights in no particular order with no back story included:

And much, MUCH more.  Which I can not disclose.  Because what happens on Shitfaced Saturday’s at Steph’s Stays at SSS.
Partying with me & select friends really IS that awesome.
After all   friendship has it’s privileges. 😉