I bought a new Camera, it’s pretty fucking sweet as a matter of fact.  So I being the good awesome, fucking exceptional friend that I am…  I told my buddy fucker that I would send him my old one.  As is, free of charge.  It’s kind of crappy from being dropped too many times and the automatic flash don’t work for shit but it still takes awesome pictures when it it’s not being douchy decides to co-operate.  I even included my grossly over-priced XD memory card (cost me $40.00 for 1GB bah!) because my shiny new camera actually takes regular memory cards (it’s about damn time Olympus!) and a mini tripod in case he wants to make some home porn be in the picture properly using the self timer function.  You know instead of standing in a mirror like a fucking douche.

So on Saturday (the 16th of October) I dutifully and lovingly packed up my camera, using fragile tape and everything and headed off to the post office. 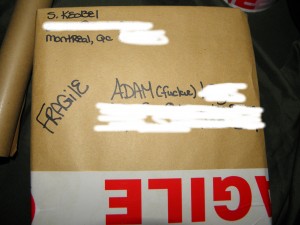 Yeah you see what I did there?  His real name is Adam, I call him Fucker.  It’s a term of endearment.  Really.  I love the guy~  See look: 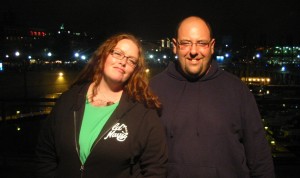 I even sent it EXPRESS because I’m awesome like that.  So I texted Fucker to tell him that I mailed out his package and said goodies and it should be there by Tuesday/Wed latest.  Well you can imagine my surprise when I got home from work this afternoon and I get a notification slip from you douche-bags saying I have a parcel and could I please hand over $9.41 (cash only of course) to pick this up.  Seeing as I have NO ID at the moment and have ALL my packages sent to work because I live there, happen to be around when delivery men show up therefore ensuring that I get my package.

So I hop onto Canada douchebaggery post.com with the tracking number to have some sort of a clue whom this might be from.  Well Lo and fucking behold it’s a package from Fucker!  Who lives in Kitchener, that’s how I knew.  Except according to this which transcribes to: YOUR PACKAGE WAS SENT BITCH and the tracking I so dutifully took a screen shot of: 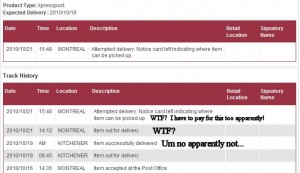 According to that, it was successfully delivered!  Except that’s NOT. TRUE. FUCKERS.

So essentially let me break this down:  Apparently one of your tight ass postal workers doesn’t appreciate my calling MY friend Fucker and thought it was a personal affront to you?  No you see if that was a random attack on one of you postal workers I would have done something like this instead: 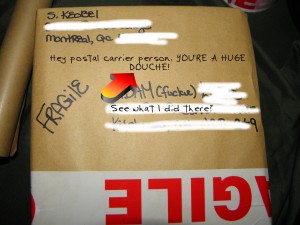 This would have been grounds for a complaint, but I DIDN'T do that...

But you see, I didn’t.  Basically your just trying to ass rape me for money.  Do I look like a fucking ATM to you? 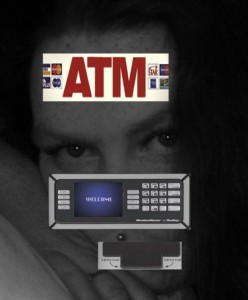 I don’t fucking think SO!  You know what really kills me though you douchebag ass monkeys?  It cost me $8.54 to mail it.  Yet to have it sent back to me it’s $9.41?  Please tell me how THAT works out?  So I had to shell out money to send it there, and because your carrier/delivery person has some deep seated fucking issues and needs therapy, I have to pay $9.41 to have it sent back to me and then pay you AGAIN (yes that would be three fucking times!) so that my poor friend fucker can have a digital camera to capture precious memories such as him dancing around in his underwear his adorable children?

I sent you a really snarky e-mail.  I anticipate your reply, and possibly someone pissing in my mail box.  Which would be quite the feat.  I’m looking forward to calling up the Ombudsman and nailing your asses to the wall for your fucking douchbaggery.

Just thought I would let you know.  I’m good like that.

Brought to you by the fine people at: Poorly dressed! 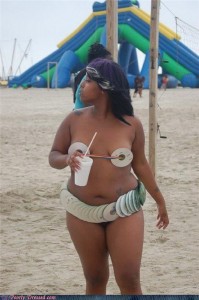