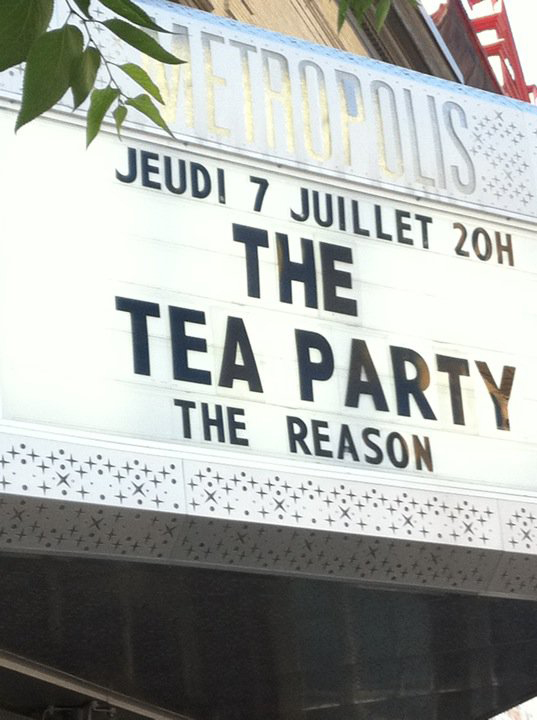 Now don’t get me wrong, I love the tea party, been a fan of theirs for a  since high school, back in the dark ages.  Not a die hard fan mind you but a fan none the less.  They’re from Ontario and so am I.  I also love me some affordable concerts!  The one thing that I love about this city is that there’s a mixed bag of venues from the huge ass Montreal hippodrome that U2 infused over 3 million cool one’s into the now defunct site to host a huge ass concert (apparently it’s due to be demolished soon after the show after being there for over a century) that I missed (which I’ll get to in a moment) the bell center  which is the most common place for concerts or more intimate and affordable venues such as the Corona Theater (where I had the opportunity to see Finger 11 in January and it was AMAZING!) and Metropolis which I had never set foot into until Thursday night.

The Corona, much like Metropolis is a theater gem that you don’t see anymore these days.  Both locations are historic and neither one of them are in the most sought after neighborhoods either.  However if  I had to choose what neighborhood I’d rather be in any time of the day the red light district of Montreal ISN’T It.  I love ghetto trash, I find this innate charm in those areas and maybe on a different day I would have been inspired.  Except I wasn’t armed with my camera, capturing the real gritty ways of Montreal which is always interesting.   I was on a mission to pick up show tickets to see the tea party.  I was on the fence about going originally and should have trusted my instincts.  After checking out their set list and seeing quite a few of their songs that I loved and a mere $40.00/ticket I decided that since I couldn’t go see U2 because that was  an event that I didn’t realize had more tickets left, I would still get to see a band that I had  some affection for.

I was tired and not really feeling up to it but determined to go thinking that once I got there I would have a good time.  Because that’s usually the way.  I do however hate general admission concerts as a rule.  I’ve been to three and I’m pretty sure that Thursday’s show was going to be my last.  Evidently I’m too old, cranky and tired to go to a GA concert on a work night anymore lol.

Show starts at 8pm with The Reason opening.  I thought it started at 8:30 and ended up coming in just as they were finishing up their last song of the night so can’t really comment on them.  Although I will say that from the little I did see, they seemed to really work the crowd and had a positive energy about them.  Then that’s when the wait started.  The downfall to smaller stages is that you’re not able to set up several groups at one time.  I get that.  However waiting almost a fucking hour  for TTP to arrive on stage after the reason’s tear down and sound check was beyond ridiculous!  I should have carted my ass upstairs and grabbed a balcony seat, however for some reason I didn’t.  The crowd was getting restless (with good reason) and my patience was running out and I was starting to get pissy.  I was already tired, it was almost 9:30 pm (you know an hour and a half after the show started) and my feet were killing me.  It’s bad enough that I’m on my feet all day at work, but at least there I’m productive.  Yes I know I could have sat down, however I feared I would fall asleep from sheer boredom.  If anyone thinks this is impossible, trust me it’s not.  I’ve passed out in some pretty ‘creative’ places before.

I contemplated leaving before they even came on but that would have been a huge waste of money and time for nothing.  Turns out it was anyway but I digress.  So there they were, the tea party, on stage FINALLY.  The dissapointment was evident right from the start.  Mostly due to the sound guy!  The sound in there was shit.  I know it varies from place to place and where you’re located and blah blah blah, however you would think that the technician would have a fucking clue!  It was ridiculously loud which is appropriate for a concert except that you could barely hear them over their instruments.  So between this static-y, white noise effect coming from God knows where and the douche bag who was whistling at a decibel that was  so shrill, I had to put my fingers in my ears (like one of my kids at work) to stop  my ear drums from taking a bigger beating then necessary, it was hardly enjoyable.  To top it all off, the guy in front of me was practically having an orgasm and was flinging his hair to and fro and sprayed his sweat on my face more then once and he was NO WHERE NEAR naked enough or hot enough to be doing so!

From a musical standpoint, they played well.  Although Jeff Martin, the ego-eccentric lead singer lacked passion and looked like he would rather be anywhere but there.  Not unlike myself!  I wasn’t the only one who thought so either.  On the bands facebook page someone else had the balls to say exactly what I was feeling.  Interestingly enough, when I looked today, wouldn’t you know it, any negative, less favorable comments about the concert Thursday night had been deleted.  Can’t handle the truth boys?  The reviews that I had seen were a mixed bag ranging from sheer elation to absolute dissapointment.  Of course, anything that was less then someone gushing about how awesome they were was removed.  I didn’t have a bad time per say, although I have to say on a scale of one to ten I would have to give them a 3.  In fact, I didn’t even stay to the end.  I was so UN-inspired, that I left early even knowing that two more of my favorite songs were about to be played.

As I said to a friend of mine, it’s like going on a date with someone that’s almost perfect in every way only to find out that he’s really, really bad in bed.

If the opportunity ever came for me to see them again, I wouldn’t bother.  That was 4 hours of my life and $40.00 I’ll never get back again.  I don’t totally regret it, I just wish that I had trusted my instincts and not went.  Because if I hadn’t, then I would be at the U2 concert this afternoon.  However, I couldn’t cough up the funds sadly since I have bills to pay.  Even though I have a feeling that $70.00 would have been MORE then worth it to see them play.  Unlike the tea party.  Although the live experience has tainted them for me on one level, I’m not going to shun their studio recordings.  I’m still a bit flabbergasted that there was so many people who were all OMFG this was better then meeting God in person!  Although, they do say that love is deaf, dumb and blind… Clearly these people are just that.

To the ass bag that commented that *I* didn’t know how to use facebook: FUCK YOU.  The comments that weren’t favorable WERE removed.  So get a fucking clue before you start shooting your mouth off about things that you clearly know nothing about.  Anyone who knows the tea party knows that Jeff Martin is horrendously egotistical.  Clearly your loyalty has made it UN-able for you to read.