I rarely talk about my family on here as a matter of principal.  However I think that this is one of those things that I should be calling a few people out on.  I won’t name names and I can almost guarantee that this is going to piss someone off (don’t care) because it’s the truth and if it pisses you off, well then chances are you are somehow responsible for that.  A guilty conscious comes in many sizes and you can bet your ass I have yours.

I know not everyone cares for my dad for whatever reason, that’s fine.  However he’s still my father and *I*, not to mention my mom and my sister are still a part of this family like it or not.

When someone in the family has died or is dying, your behavior is fucking appalling.  Sometimes even short of embarrassing.

Yeah I said it.  You know it was one thing to come home years ago under the impression that my nanna was still in the hospital and I went (on my last night in Ontario none the less) to go see her; only to find that she had been discharged.  Because no one bothered to call my dad and tell him his mother was out of the hospital.  Which is selfish.

Clearly you didn’t have in your heart to bother calling for whatever ridiculous and most likely petty reason you had.  Never mind how you feel about my father, you never thought to think of anyone else now did you?

As a direct result of such selfishness, I never got to see her again before she passed away.  All because you were too petty, stuck up or whatever the fuck to bother.

By that I mean, go fuck yourself.

Oh but that’s not the worst of it…

She DID NOT WANT a funeral, I was told but numerous family members not to bother making the trip in from Montreal to Ontario to say good-bye.  Only to find out later that there was one, last minute and hastily planned.  So I of course did not attend, not because I didn’t want to, but because I was told not to bother.

My great Uncle dies.  I find out about it on Facebook  which is rather humorous in a sad way since one of my Aunts said that was tacky previously and yet she was the one who posted about Uncle Jim passing.  Again, didn’t bother to call anyone at my house but puts it on Facebook.

I could go on and on and on but I won’t bother.  I’ve been keeping this to myself for a really, really long time.  Not anyone because hey and eye for an eye and all that right?

Sorry mom, I know you said that two wrongs don’t make a right and all that but I am also a firm believer in karma and well i’m just giving it a helping hand.

I’m also a firm believer in being honest above everything else.

I get why one of my cousins posted that his mom was in the ICU, utilizing Facebook is a great way to reach a mass audience at once especially when it comes to family.  No one has died (yet) but they’re ill so it makes sense.  Of course no one bothered to call my dad, except for me.  It is his sister after all.

My aunt passed away at 12:15 this morning.  We aren’t close anymore, however she’s still my aunt.  She’s a sister to my aunts and my father and a mother to my cousins and a wife to my uncle.  She’s a person.  You know how my dad found out?  My mom seen it on Facebook and called my dad to tell him…

My sister drives me nuts but life wouldn’t be the same without her.  My mom is the most amazing person and I love her dearly and I know that the day will come when it’s time to say good-bye.

However, when it does; i’ll do the right thing and call. 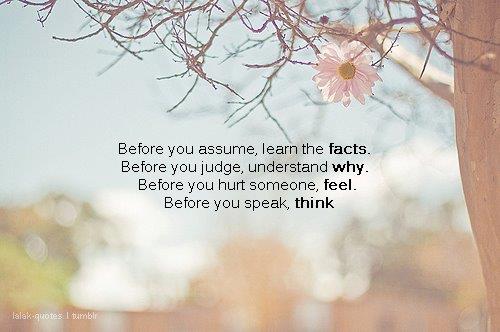 It’s been a really long time since I blogged.

Mostly because I associated my blog (and anything computer related for that matter) with smoking.  I can proudly say that I have NOT had a cigarette since about 10:30 pm on Sunday July 15th 2012.  The day before my grandfather’s birthday, a man who coincidentally enough died of lung cancer.  I had to make some major lifestyle changes due to my hours being cut back at work, which resulted in an obvious loss of income and that was one of them.

Quitting smoking was one of the hardest things I have ever done for myself but I couldn’t be happier that I did!  They say that everything happens for a reason and something good came out of having my hours scaled back.  That was probably the only thing but it’s better than nothing.  Which is funny because everyone kept telling me “think of the money you’ll save” when in reality my hours had been literally cut in half and I had to choose between smoking or eating and paying my rent.

I’ve also partaken a greater interest in photography.  It affords me a different artistic outlet and I have found all kinds of helpful and lovely people on google +   it’s where all the cool kids hang out.  I haven’t really utilized it in any other way except for some light social interaction, but mostly photography.  I also decided to embark on the Google+ 365 self portrait project.   it’s an interesting challenge and you can follow my own personal journey (that started yesterday) here

I started making jewelry and stuff and opened a store on Etsy, which you can find here  eventually I need to investigate sharing my Etsy store with Kristina who makes these AWESOME sock monsters and monkeys.  You should check her out on facebook  and tell her Steph sent you. 🙂

I’m starting to get tired and going to wrap this up, but this is what’s noteworthy in 2012 for me at least:

I’m busy and content.  Which is all that really matters I think 🙂