Mostly thanks to him.

Not just any him, but THE him.

He gives me the most amazing ideas I have ever had.  He’s my muse, my inspiration and while he has moments of total douchbaggery (no one’s perfect right?) I think he’s pretty awesome and does some pretty awesome things as well!

I sent him a copy of this simply because I really liked it and I thought he would like it to: 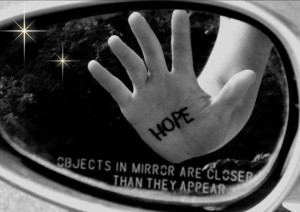 He passed it onto a friend.  Which gave me the idea to create the hope project.

I want to pay it forward the same way he did, only in a slightly different manner.  So I posted about it on NAOYP facebook page which I in turn cross posted to my profile.  I had gotten a comment that it was a really powerful image and it is.  Later on that night, I got a message from someone dealing with depression (including a failed suicide attempt).  This simple image moved them to tears.  They also went on to say a few other things that I won’t/can’t share (without their permission) and also mentioned that they were thinking about copying it and hanging it around their home.

I hope they do.

I was floored and very, very touched.

I miss Jason A lot.  Not a day goes by that I don’t think of him and while I wish that I still had him, in loosing him I found a purpose in life.  Or perhaps it’s just a purpose in general.  My only goal for starting the foundation was to help even one person to not give up so that Jason’s death wouldn’t be in vain.

I’ve succeeded in doing this.  I won’t lie, it feels incredible!

I had some help along the way from Pete.  I gotta say Pete and I seem to work really well together and I’m really happy and extremely fortunate to know him.

Together we seem to accomplish great things and I love him for it.

The great wedding cake project, this was taken at 4am when we were finally done the most epic cake I have ever made!