Today at work was “interesting” to say the least.  It was a constant flow ALL damn day!  Which is really irritating because it just doesn’t stop.  Thankfully I didn’t have a bunch of other work to catch up on which is rare, otherwise today would have been one hell of a hindrance!  Although I did have a rather humorous moment with some of my all time favorite Thursday regulars today who always brighten my day.  I bring their food to the table which is something I don’t normally do but I always make an exception for them.  There was a little bit of icing sugar on on of their napkins so he says to me” Hey Chef Steph, what’s this white stuff on my napkin?” I just sniffed really loud and said I had no idea lol.  He laughed at that, which is good because they have an awesome sense of humor!

I got a rather bitchy e-mail from the property manager because I haven’t sent in the revised lease renewal/rent increase forms.  So I send a bitchy one back informing her that she STILL hasn’t had my heat repaired and my hot water is still epically screwed and only works on occasion ( these occasions are generally NOT when I need to shower of course!) and the front door lock is broken AGAIN, the people upstairs are STILL a thorn in my side among countless other things so off to the Regie du logement I go after I send her a registered letter stating my long list of complaints and if they’re not dealt with in a certain period of time that I specify then I can file a complaint with the regie.  Generally the Regie falls in favor of the tenant and that generally scares the crap outta landlords 🙂  I of course will use this in MY favor!

Anyway moving along to my promised chocolate review 🙂  First though I should mention that I am NOT a fan of white or dark chocolate.  I find white chocolate WAY too sweet for my liking and dark chocolate is too bitter (for my tastes) if the cacao content is too high.  30%-40% is OK but this 90% nonsense, might as well suck on some coco beans. Yeah its healthier but well not my style, unless its paired up with something yummy like orange ganache.

Anyway my lovely friend Lisa who is also a foodie like myself sent me a lovely assortment from Russell Stover.  One of my favorite chocolatiers if I want something simple yet delish!  I’d never seen this one before: The urban collection: Modern world chocolates my box was blue, good choice since its my favorite color!  I was intrigued to say the least!  Can’t find these in Canada (not that I looked very hard but I have never seen them here). 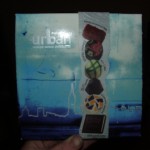 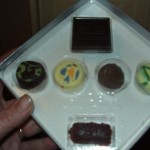 I tried the Sea Salt Soft Caramel first, and I was surprised that it was actually quite tasty and not salty in the least.  Unlike regular caramels it wasn’t very sweet and yes in case your wondering there was visible sea salt in the caramel itself.  Its not something I would eat all the time as it did leave an unusual aftertaste but I liked it! Rating 6

Dark Cacao from Ghana was next…  Again not a dark chocolate fan but this was decent.  The taste wasn’t too bitter but a little bland for my tastes.  Rating 5

Key Lime was my next victim and it SUCKED!  Essentially its a white chocolate base that I picked of because I really couldn’t stomach it and nibbled on the middle.  Not too limey, mostly it just tasted kind of strange.  The potential is there, I think a dark chocolate base would have been better.  Rating 4.5

Pistachio Nougatine was my next choice, not a big pistachio fan but I love chewy things.  Its milk chocolate that has been rolled in red colored sugar crystals which made for an interesting first impression (and hurt the roof of my mouth) but it was SO good!  So good in fact that I would have to say that this is indeed my favorite one of this collection.  Had a true to form flavor, was bright green inside and was chewy.  I give this one a 7

Grapefruit Ganache looked really cool on a first glance but was an EPIC FAIL on the taste scale!  The middle was somewhat grapefruit-ish but left an odd aftertaste.  The texture was kind of hard and well the white chocolate shell left a lot to be desired.  Again I think this one could be better, and would likely taste better with a slightly darker chocolate shell.  I rated this one a 3

Espresso Truffle was the last one left in my 1/4 eaten box of chocolates.  Again this one also looks very artsy and I was excited about trying this one!  Truffles and espresso teamed up with chocolate? YES PLEASE!  I took a bite, after drinking some water to get the taste of grapefruit ganache fail out of my mouth and I found the dark chocolate base to be too bitter for my tastes.  The espresso truffle in the middle somewhat fell flat but the taste was intense which was good but I felt that it was slightly overpowered by the dark chocolate shell.  I would think that milk chocolate or even a less coca intense dark chocolate would have please me more personally.  I give this one a 6.7

Overall I wouldn’t buy it again but it was certainly worth the taste trip!  It satisfied my need to try something new, it is artistically pleasing and would make a nice gift for any foodie who likes chocolate.  Although likely better suited to more adventurous types and people who like ALL chocolate overall.

This brings me to my ALL time favorite chocolatiers and that would be Lindt, you can’t go wrong there!  John got me a heart shaped box of chocolates last year for valentines day and I have to say that I loved the whole thing (even the white chocolate and dark chocolate are decent!)  So when I went home to ON for Christmas I spotted a box of Lindt Petits Desserts at my moms house.  I was intrigued as they looked SO yummy!  Each chocolate is designed after a dessert: Chocolate log, Macaroon, Lemon tart, Meringue, Brownie, Tiramisu and Creme Brulee.  My mom had a mini gift box and of course wasn’t willing to share.

However whilst shopping after boxing day madness was over I was in the pharmacy looking to score a bottle of my favorite perfume So De La Renta by Oscar de la renta (which retails for about $85.00 CAD) yet always goes on sale at Christmas for $20.00 and lasts me for a LONG time.  Which they were sold out of so I bought my second favorite Volupte instead at a bargain price.  Anyway as I was walking to the cash I noticed a GIANT box of this chocolate collection on sale for $10.50 regular price $28.00 which is more in my budget and for 41 of these assorted chocolates it was a steal!

I didn’t open it until I got home to Montreal because it was sealed in plastic and I didn’t want to spill my precious chocolate all over my luggage!  When I did finally decide to indulge I was drooling and couldn’t decide which one I wanted to taste first!  Let it be noted that I can really only consume 1 or 2 of these before I have had enough and I still have some left from Christmas and its May now lol.

The chocolate logs are divine!  Milk chocolate filled with dark chocolate and marzipan which made for an interesting combination and a lovely silky texture inside that was music to my taste buds!

Meringues were also yummy and certainly one of my favorites in this collection!  Its soft center milk chocolate with crunchy pieces of meringue and exceptionally smooth as per the usual with Lindt.

Tiramisu was a little disappointing!  Its my favorite dessert EVER and even though it claims to have a coffee and tiramisu flavored center I beg to differ.  Still tasty overall but not as good as I had expected or hoped.  I even tolerated the white chocolate top for this one.

Creme Brulee was interesting visually as it does resemble a edible chocolate “bowl” filled with white chocolate acting as the brulee that was infused with biscuit pieces that I couldn’t quite detect, brulee and caramelized sugar.  While it was super cute and even looked like a real creme brulee the white chocolate was a little sweet for my tastes with the extra added sugar and such but it was still good if you like a sweeter tasting chocolate.

Lemon tarts were the cutest of the bunch!  They very tiny and very much resemble a little lemon tart with milk chocolate of course acting as the “tart shell” and the inside was filled with a decedent creamy white chocolate truffle center, lemon flavor and these mysterious biscuits.  While the lemon flavor was almost an afterthought ( I am a DIE HARD lemon dessert fan) so I was disappointed in the truffle’s sweetness overpowering the lemon and I don’t know where these biscuits were supposed to be (possibly in the base) I didn’t detect them much.

Brownies were interesting…  Its a dark chocolate truffle with a dark chocolate/hazelnut flavored base.  While I did enjoy these I felt that the dark chocolate somewhat over powered the hazelnut just a smidge but these too were adorable and they are shaped like itty bitty brownies!  Ah hell the whole collection is adorable!

Last but not least is the macaroon another one of my favorites that still lingers in the box because I want to savor it!  Its dome shaped milk chocolate infused with biscuits (yes I can actually see them in this particular chocolate) infused with almond praline and they are heavenly!

Worth the price overall but I being the thrifty one would certainly buy these again.  Most likely when I visit the Lindt Chocolate factory that recently opened not to far from my mom’s house!  Makes a lovely gift, they’re adorable to look at and delicious to consume as well! 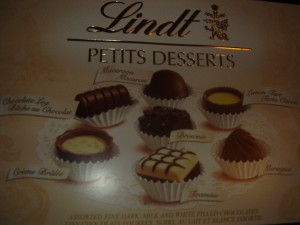