I have my right arm dedicated to a theme.  That theme being pirates.  I had a conversation with someone not too long ago about this and they simply ceased to get it.  That conversation went a little something like this:

Me: Pirates are cool, who doesn’t like pirates?
Dan (in a snotty tone): Ugh I don’t!
Me: Why not? What’s wrong with pirates:
Snotty tone Dan: Ugh because like I grew up in Quebec like and like that’s not a part of Quebec/French Canadian culture (you mean not a part of your household ‘culture’ douchebag?) so I was like never exposed to them.  Pirates are only cool these days because of Pirates of the Caribbean.
Me: Well OK then… I don’t expect you to get it, but don’t be so fucking judgmental Dan; it makes you look like a total ass bag.
Snotty tone Dan: Ugh well like whatever Steph! (sounding like a valley girl)

Then he goes onto tell me some story about a robot chicken episode where there’s a pirate and he’s smelly because he hasn’t bathed in an eternity and has scurvy or some shit.

I honestly don’t really know what he was saying because at one point I just started to tune his ass out because I couldn’t stand his over use of the word like and sounding like a fucking valley girl.

His bottom line: Pirates aren’t all that glamorous and shit.

I never said they were.

My bottom line: I can’t stand talking to the guy anyway.  This is why he’ll never get laid (especially by me), he’s obnoxiously  judgmental, whines constantly, makes the most ignorant statements ever and sounds and talks like a fucking valley girl!  Needless to say, we don’t talk anymore.  I don’t care how judgmental I sound, I WILL judge you for butchering the English language, it’s sad that in today’s day and age that using proper sentence structure and grammar and not sounding like an extra from Legally Blonde is actually hot…

Random Fact:  I’ve never seen ANY of the pirates of the Caribbean movies.  In other words…  Johnny Depp and his hotness, let alone ANY of those movies had ZERO influence on my sleeve.  I wanted something to represent my niece and nephew.  I also LOVE skulls and Jolly Roger style flags and regardless of all the negative aspects of pirates, they are seriously bad-ass.  So on came the original plan: two pirate /Jolly Roger styled flags one girly, one more manly with the text : Death before Dishonour.  That was really all I wanted in the beginning and then Tim (my brilliant tattoo artist)  got right into it and so did I.  Thus my sleeve was born.

I had always intended to sleeve out my arm, I just wasn’t sure how to incorporate an entire pirate theme into one sleeve.  Not as simple as it sounds.  The internet didn’t yield much inspiration in that regard and it’s essentially been a collaboration of Tim & I pulling idea’s out of thin air and using reference material that other clients never ended up using.  Needless to say with my ship, the compass rose, the two flag, text and my new bad ass, sword wielding skeleton with a treasure chest, things are well under way!  I need to get a proper picture of the whole thing so I can show it off in all it’s glory.

I don’t give a shit if you don’t like it.  It’s MINE!  My tattoo designed by my tattoo artist and myself. It’s pretty damn awesome and I love it!  😀 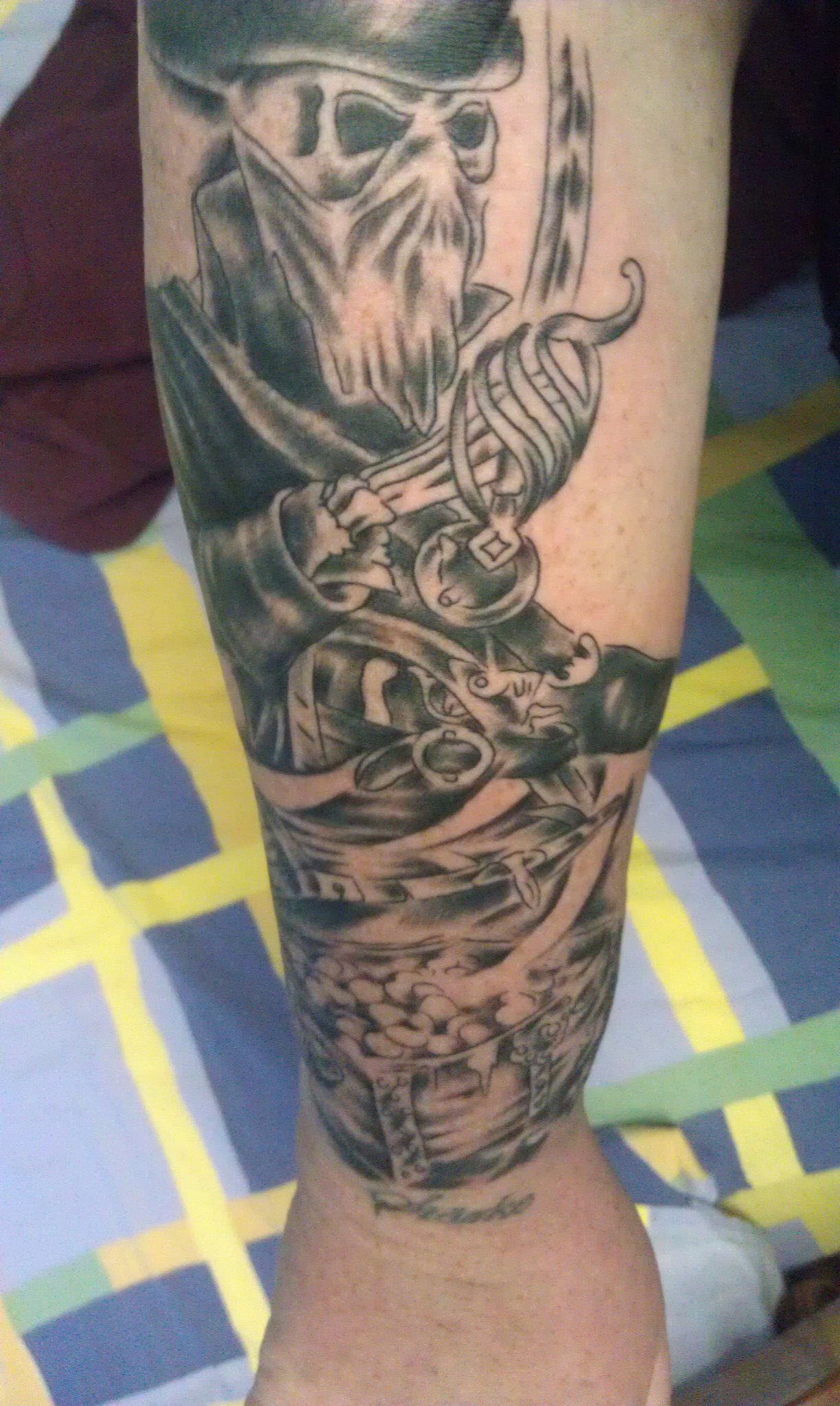