Clearly, some people in this world simply can not handle my frank level of honesty.  In today’s society, we’re far too sanitized!  Everyone is too fucking scared to truly speak their mind for fear of offending someone or something.

Except for me that is.

Here’s the bottom line: chances are I’m saying exactly what you yourself are thinking, but lack the balls to say.  I don’t go out of my way to be offensive (believe it or not, stop snickering!) and I also posses the ability to keep my mouth shut when the situation calls for it & occasionally posses the ability to be tactful.  However I refuse to sit there and not speak up because I’m afraid that you’ll be offended.  If you’re entitled to an opinion, why aren’t I?  Why is it that I am expected to be respectful of your opinions, thoughts and beliefs but you can’t find it within yourself to be respectful of mine.

I speak my mind because it hurts to bite my tongue. 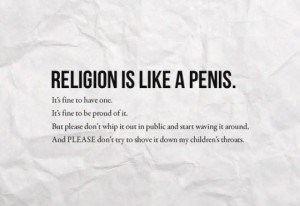 Images like this, among countless others exist for a reason.

Now don’t get me wrong, I’m NOT hating on anyone’s belief’s. Nor am I saying that this is a universal opinion of anyone who chooses to partake in organized religion either.  I’m very curious and respectful of anyone’s cultural/religious belief’s and often make inquires to such.  Whatever brings you hope or comfort, get’s you through the day is OK by me.  More often than not, I enjoy these conversations.  Some of the rituals surrounding various cultures and religions are not only thought provoking, but symbolic in a heart felt way.  I’m very fortunate to be friends and work with people who are various cultures and religions and they are very patient when it comes to indulging my curiosity and I love them for it!

I’m technically a Roman Catholic.  I’ve since denounced my religion and prefer to refer to myself as a non denominational person if asked.  I’m sure that my nannies are spinning in their graves (sorry nannies, I love you and no disrespect!).  I have my own set of belief’s that I choose to keep to myself.  Because really, it’s of no concern to anyone but myself.  That brings me forth to today.  I was in the middle of a discussion with someone in regards to lent   and how they felt that they needed to do something more challenging next year.  To which I commented: ‘I gave up on that years ago, I can’t be bothered with Catholicism anymore.’ they sighed and replied ‘that’s often the case’.

So I said, can you blame them? The Catholic religion is FULL of hypocrisy and I went on to say that the pope is a douche-bag and priests are running around raping alter boys yet the pope is more concerned about gay marriage and how it’s ‘not sanctioned’ sodomy is wrong and no birth control or abortions for you!  It’s appalling that when someone dies, a child is born with hideous deformities ( and the list goes on) that the die hard’s always say: It’s God’s way. OK well what if my child was born gay, since God allegedly created us all than why in the fuck is it so wrong? By wrong I mean in the eyes of the fanatics.

I wholly support the gay community 100% by the way.  I always have and that’s NOT going to change anytime soon.

All of which really pissed the person I was talking to off.  They fired back with:”That’s not a global opinion Steph” and they’re right. It’s not.  It is however *my* opinion, to which I believe I am more than entitled to! To which I said, I know that.  I however choose not to embark on a path that clearly supports hypocritical nonsense.  To which they said they were offended by my use of the word nonsense.  I’m not talking about your run of the mill nonsense, I’m talking about HYPOCRITICAL nonsense, to which there is a difference. At least in my point of view. It’s my blog, so I don’t give a shit if you don’t agree.

It also explains why this person is such an opinionated hypocrite themselves.

They themselves have a child, one who was conceived out of wedlock.  Which in the eyes of the catholic church, makes that child a bastard.  Also sex before marriage? That’s a big no no too!  What if said child is gay? Oh shit, heads are going to roll.

So I offended this person once again.  Seems to happen a lot. Not that I give a shit, I’m not going to change who I am just because someone has a problem with it. I don’t give a shit if you like me or not to be honest.  However, respect is a two way street. As I said before, I respect everyone’s right to believe in what they choose, to worship who/where they please.  Doesn’t mean I have to like your point of view, nor are you required to like mine.

I however, at least respect you and what you believe in regardless and I don’t take offense to your inability to give me the same courtesy.

I can not with a clear conscious partake in a religion that tells me I can’t:

Just a few reasons of my own choosing really.  Don’t get me started on all the cases of rape taking place within Catholic institutions!  Blows. My. Mind.  When is the Vatican going to step up and acknowledge that celibacy is CLEARLY not the answer when some of the men who represent your churches are committing sins set forth in the bible and traumatizing children?

So when it comes to religious beliefs, I freely acknowledge all of them and choose to embrace the one’s of my choosing. Because that’s my right. Very much like my opinion. So don’t you dare call me offensive simply because I don’t agree with the religion you choose to partake in. 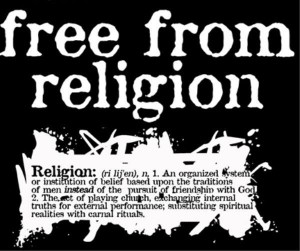 I await your hate mail.  I LOVE hate mail!  Allow me to make it easy for you:

Bring it on bitches! 😉