I remember eons ago my sisters old roommate had this very image on their living room wall: 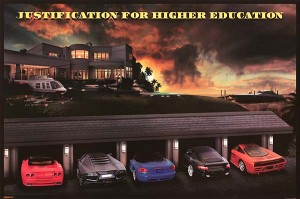 I have a higher education and you know what?

Granted I’m going back to school, again. Because my current career just doesn’t do it for me like it used to and well the earning potential far surpasses what I currently make.  Or at the very least, it’s supposed to. Even if it doesn’t, I still get to learn something new. So all is not lost, or at least I can hope!  Originally I had wanted to look into graphic design at Inter-Dec college  until I contacted them and found out the cost of tuition.  16,750.00 Nope that’s NOT a typo, that really does say sixteen thousand and seven hundred and fifty dollars.  Which is painfully close to how much I make in a year…  So let’s be real here, who in the fuck can afford that?  Also someone I know went there for their cooking program (well Lasalle specifically but it’s the same deal/school) and not only paid a small fortune in tuition, but paid an arm/leg/toe for books and so forth.  Her two biggest complaints? That her $500.00 text book was used ONCE in class and their teacher didn’t seem all that interested in what they were doing.

That concerns me a great deal.

Small class sizes, a downtown location and a few other things do have some appeal. I also know several people who graduated from that program and are doing quite well for themselves.  However that huge ass price tag, for ONE YEAR of school scares me.  What if i’m not as fortunate?  There are never any guarantees  that you’ll go somewhere great and do well.  I know countless people with degree’s and they’re doing completely different jobs than the one’s they’re educated for.  Myself included.  Mind you, I *do* have a culinary related education aside from others.

Except I want a change this time!  Concordia university does offer the program I want for design but the admission requirements are huge! I’d get laughed out of admissions I’m sure 🙂  That’s OK though, I have artistic talent although it’s not quite up to par with their standards and that’s totally OK!  Dawson college also offers it, however you also have to take additional courses  (scroll down to the second page) and it’s a three year, full time program.  Let’s be real here, I’m almost 34 with a full time career already and it’s just not feasible for me :/  Although it does seem rather interesting and it’s far more affordable too!

So alas, I might end up at Concordia taking something a little different, yet still interesting to me just the same!

In any case, I really hope it’s worth it!  I’ve already spent close to 20 years in a career that I’ve come close to hating.  It’s time for a change and one shouldn’t have to pay out the ass for the privilege either!