Before I write my intended post, you know what’s exceptionally fun?  Going into a place that you regularly frequent, seeing the poor bastard wanting to kill his newly hired co-worker & when they ask you if you want anything else? Look them straight in the eye and ask them if they want to make out. 🙂

So back to vagina land…

By that I mean my work.  Aside from the gym teacher, the entire staff is sporting a vag.  Most of the time it’s OK but I have to admit, I have a whole new appreciation for working with boys.  They’re sweaty, smelly and generally full of it. However they don’t get PMS, get all pissy and offended easily or get their periods. Oh and they don’t usually cry at the drop of a hat either…

I’m telling you, we need to turn my place of work into a reality show.  It would blow the ratings through the roof!  Needless to say, when you have that many woman crammed into one environment, shit is likely to get fucking ugly from time to time.  What floors me though is how utterly childish some people can act.  It’s a sad reality when the children at your work with are more mature than some of your colleagues.

I don’t take most things personally, I believe in accountability and try to be respectful at all times.  This pretty much sums up how I feel about people who get offended. 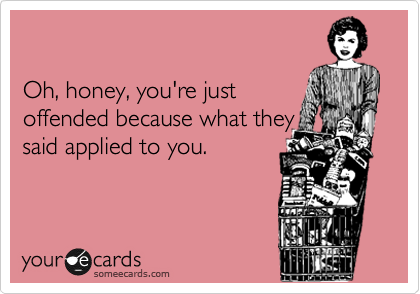 It floors me when people get offended for getting in shit for something that they damn well know that they’re NOT supposed to do.  I mean really?  WTF is wrong with you?  Also, I don’t believing in raising one’s voice. I believe that one should better their argument instead.  There is however a limit to that.  When I have to give someone shit about something, I try to be a decent person about it.  However when I have to remind you on numerous occasions not to act like a fucktard, my niceness goes out the window.

That’s when I yell.

Which is exactly what I did.  Admin seen/heard me yelling at said co-worker and instead of backing me up like they should (knowing that it was wrong), and I said what she was doing was disrespectful not only to me but everyone else; she threw my ass under the bus. Cunt.

Needless to say my boss (whom I adore and respect on a number of levels) got an e-mail that was CC’d to my kitchen partner in crime and the rest of the admin team.  I’m not pleased.  There is one thing I will not tolerate and that’s being taken for granted.  God help my ass when I put my foot down for a change, everyone get’s their panties in a knot over it.

So I basically said that if it keeps up I will quit.  I love my job, I really do.  However when the environment you work in becomes so toxic that you can’t handle it anymore, it’s time to go.  I refuse to be sensitive to my co-workers needs if they flat out refuse to respond in kind.  I freely admit that it was inappropriate to raise my voice.  However when I have gone from being polite, yet firm to stern and you still continue to violate said rule; I will go prison guard bitch on your ass.  Had she listened the first fucking time, none of this would have happened.  Not to justify it, but it’s true!

The co-worker in question still won’t speak to me. It’s been over two weeks.  If you’re going to be that pety and childish, so be it.  I was asked to apologize and I refuse to do so.

Because I have nothing to be sorry for.