It wasn’t enough to get a letter today from the government informing me that I apparently owe them $758.00 because they ‘re-assessed’ my taxes.  That’s not a huge deal because I have the T4’s to be backing up that bullshit claim.  That’s the one downside to doing your taxes online, you need not hand in your slips, but it’s a damn good thing that I hold onto these things because them ‘readjusting’ the amount of taxes I owe is ridiculous.  Evidently the people at revenue Canada can’t do math?  How do you just “decide” that I didn’t pay as much as I said I did?

There will be none of that thank you very f’ing much.

Alas, this isn’t about that.

It’s about my dad.

Back in June he was diagnosed with lung cancer and emphysema.  Before you put on your judge-y pants, my father quit smoking over 30 years ago so this disease?

Not just limited to smokers.

So there is no cure for emphysema and while my dad was able to kick cancer in the ass, it doesn’t change much.

In fact, it doesn’t change anything at all.

They figure that he’s had this disease for years and it went largely ignored because of our family history of having lousy lungs, so the time that we have is extra precious because we thought that we had more of it.  Something I think that we all take for granted.  Sadly most people don’t get to living until they realize that they’re dying.  We’re pretty candid in my family about pretty much everything and death is no exception.  As soon as the diagnosis was announced my parents made sure that everything was in order and my dad planned his funeral.  So all of his wishes are laid out and we know what he wants and we’ll be certain to make sure that we send him out the way he wants.

Aside from that, life is pretty normal more or less.  It’s always in the back of our minds because it’s not going anywhere, there’s no cure.  Emphysema slowly cuts off your air until you stop breathing.  It’s cruel and while it’s something I try not to think about too hard, I try to make the most of the time I DO have with my dad.  I’ve been trying to get a family picture done twice since I’ve been home because it will most likely be the last.  It never seems to work out and I wonder if it ever will.  I went home in July after I heard the news and Christmas was one of the best one’s my family has had in a long time, it was nice.  Life goes on as it should and while my dad puts on this front of false bravado, I know it’s a ruse.  He’s trying real hard to be brave but I know he’s scared and it breaks my heart because I can’t imagine dying in such an agonizing fashion.

Shit got real when I came home and my dad was outfitted with his oxygen supply.

It got even more real when I seen him at Christmas and he was complaining that he was gaining too much weight from the steroids to help him breathe and yet all the weight gain makes it more difficult to breathe.  Seeing how frustrated he was because he couldn’t catch a break and breathe like a regular person.

Today as I was sitting in class, I got a text from my mom.  Dad has a lung infection, he’s in the hospital.  You should call him.

All of these things take on a whole new meaning when you have emphysema.  So I called my dad, we tried to have random small talk, he asked me about school, listened to me bitch about what douche-bags the tax agency is and tried to be all nice and normal all the while ignoring the fact that you could hear hospital sounds in the background while they tried to find a place for him.  Tried to keep things light and airy when he said he’s trying to stay on this side of the sod (grass) a little longer.

I tried not to fall apart as my dad said I love you to me and heard him start to cry as we were hanging up.  That happens every time we talk now because neither of us knows if that’s the last time.

My father is dying a slow death and it fucking sucks. Part of me really wants this to just be over because the wait/wondering is brutal and scary and emotionally taxing.  I can’t even imagine how terrifying it is for him.  Yet part of me wants him to at least stick it out long enough for me to finish school so he can see me graduate from university.  It’s a really big deal for me and it would be extra special if he was there to witness it.  I know he’s already proud of me, but that’s not really the point.

I can’t handle the feels.

Thank God for Nick.  While tea and toast when I get home from school won’t make it all OK, his hugs are amazing and he doesn’t mind when I come home and fall into his arms as I ugly cry about the injustice of it all.

I just can’t even. 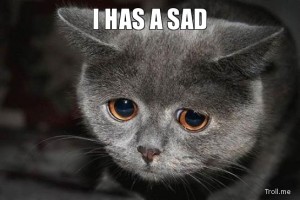