It’s been brought to my attention that you would be hurt if I didn’t invite you to my wedding.

Fuck you!
You should have thought about that before you shit on me for the last time. You are delusional if you think that I can just walk away from this and ‘forgive and forget’.

Perhaps you ‘forgot’ about the following incidents that have plagued me since last July.
I haven’t forgotten, and here’s a reminder for you.

-July 2014 you took the liberty of talking shit about me to several of my friends; behind my back when I came home to Ontario last summer.
Oh, you thought that I didn’t know?
I have VERY loyal friends who felt that I had the right to know what people were saying about me behind my back. You have a mouth the size of the Grand Canyon and you stop at nothing to try and make me look bad.

You are petty and jealous. You won’t succeed in making me look bad; you however are doing a fine job of making yourself look bad, along with jealous, petty, bitter and conniving. You just can’t help yourself.

You damaged several relationships with your petty bullshit. Thankfully I was able to restore most of them because people can see through you. That was uncalled for regardless.

In spite of it all, with the holidays coming up and knowing that it was most likely going to be my father’s last Christmas, I decided to be the bigger person and let it go. Even just for the holidays. So I did. It was one of the best Christmases I have had in a while and thankfully you managed to keep that toxic mouth of yours shut so that you didn’t ruin the holiday for the rest of us.

Let’s fast forward to February of this year. My father passes away and some piece of shit robs my childhood home and steals pretty much every damn thing.

ONCE AGAIN you take it to Facebook to spew forth your stupid petty bullshit.
I took you off my friends list; I couldn’t deal with you and your shit any longer.
You however took it a step further and blocked me. This is fine by me because now I don’t need to see –or- hear anymore of your toxic lies. 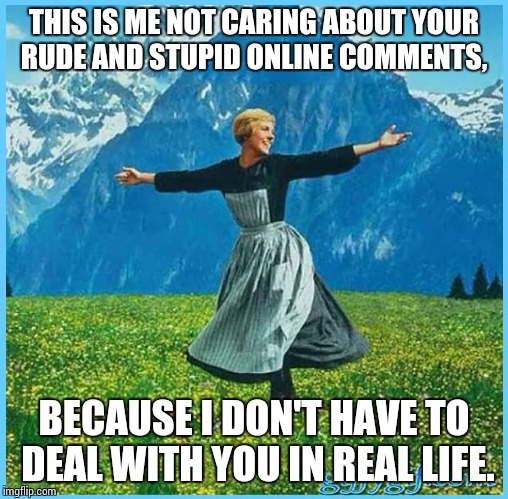 May rolls around, it’s the weekend of my father’s memorial service. I arrived in Ontario on the Friday and there you were, furiously texting away on your phone. I seen you take a picture of me, one that I did not authorize, followed up by more furious texting. So it’s pretty obvious that you were once again, talking shit about me. Don’t try and deny that, I’m not deaf; in fact my hearing is just fine. If you’re going to try and sneak a picture of me, perhaps you should turn the sound off your damn phone.

My aunt drives you home, where you couldn’t resist yet another opportunity to talk shit about me. Which of course is brought to MY attention because fuck you.
My aunt took it upon herself to fill me in on how you lied to her about how I had been talking shit about you on Facebook, which is your MO, NOT mine. I am not that tacky thank you.
No need to get into specifics but the reality of the situation is this, after I was given the opportunity to explain MY side of the story to my aunt, even she said and I quote:” What is wrong with her?” Not ME. She was talking about YOU.

The next day, the day that I was honoring my father at his memorial service, you once again tried to steal the show and be the center of attention by being a bitter and vicious bitch.

You foolishly shoot your mouth off about me AT MY FATHERS FUNERAL to my family and friends and once again try and play the victim as you always do and expect me to NOT find out about it?!?

Are you brain dead?

And yet after alllllll that (and there is SO much more) you have the audacity to tell my mom that you would be hurt if you weren’t invited to my wedding?

You don’t get to pretend that everything is OK because YOU decided that it was because it’s not. Not even remotely close.
Learn how to deal with your fucking anger; no one is willing to indulge your sorry ass anymore. You aren’t adult enough, nor capable enough to deal with anger.

Lovely example you’re setting for your children by ignoring the problem for months and months and then all of a sudden out of no where you loose your shit several months later, scream and yell at people and then when YOU have your say, you think it’s over.

Everyone keeps telling me to be the bigger person (once again) and let it go. This isn’t fucking frozen!

I can’t trust you, and yet you want me to invite you to one of the most important days of my life?

I don’t fucking think so.

I even found a perfect song for you. (NSFW) or this one seems to be pretty accurate as well.