Part one can be found here.

Time stood still right then and there.

I remember my Aunt Brenda running in, about two minutes too late to say good-bye. I’ll never forget the look on her face; she looked almost as if my dad had betrayed her in some way by not waiting. In some ways I think he/fate did it to spare her somehow. It all happened so fast.

My other aunt was there, she hugged me as I ugly cried all over her. Snot bubbles and all, which is so much more gross when you’re 36. I remember saying to her that I don’t know how she does what she does and her saying to me that days like today, she didn’t either. I developed a whole new respect for people who work in hospice care that day.

It was a surreal scene, everyone crammed into my dad’s living room, made smaller by the hospital bed. Everyone on their phone’s making the dreaded phone call to let everyone know. The kids weren’t back yet and I couldn’t help but think how heartbroken they were going to be when they arrived.

The nurse arrived to pronounce him and as I was standing in the kitchen alternating between hyperventilating and crying and saying that I can’t do this she says to me, “Oh so you’re Stephanie. I’ve heard so much about you, he was waiting for you to get here.” I don’t remember what I said at that moment, if anything at all. I just remember her saying something along the lines of he was waiting for you, can you imagine him being in pain like that for the next few weeks until your scheduled arrival?

As if I would have waited until March 10th (my originally scheduled trip) to see my ailing father.

The disdainful look on her face was a bit much. I was in a state of shock, which might have been a good thing because I get my mouth shut and silently stared at her with tears streaming down my face until I made her uncomfortable and she left the room. She needed to officially pronounce my dad and dispose of/remove all the medical stuff.

That feeling you get where you feel nothing and everything all at once. It’s overwhelming; it’s what I envision drowning to feel like.

The house just kept filling up with people. Friends and family poured in to show their support and pay their respects before my father got taken away. It was a beautiful thing to see so many people come together; I just wish it was under nicer circumstances.

A part of what happened after my dad passed were a blur, what really stands out to me is when the funeral home arrived. I didn’t know what to expect, this was a first time thing for me. They were so kind and respectful. Even the way they handled my father, it was so respectful and not morbid at all. They brought their own gurney in and they wrapped my father in a crisp white sheet. Then they wrapped him in a quilt, almost like they were tucking him in for a nap. I remember thinking that he looked cozy and peaceful and he would have liked that quilt. It was really pretty and looked like it was made with love.

I followed them out, determined to see my father’s final journey to the very end. He was there when I was brought into this world, so it only felt right to be there by his side as he left it. I liked that they didn’t show up in a hearse. They have a specially adapted car that looks a lot less conspicuous, which helps keep the nosy neighbours at bay. I was given a bag by one of the funeral directors for my fathers’ final belongings and other things that my mom would need for the final arrangements. They were so kind. Also very good looking, so that helped too (ha).

Death takes away your ability to be rational I have discovered.

Nothing makes sense to you and things that most people would consider trivial suddenly became the most important things of all.

I took it upon myself to find something for my father to be cremated in. My dad was a pretty basic guy when it came to clothes. He was a jeans and t-shirt kind of guy. I agonized over giving him just the right pair of jeans and what kind of camo shirt should I give him. Did I give him a new pair of boots? I had an absurd thought that they would be stiff and hard to walk in because they’re new. I was also torn between giving him the one’s he always wore and donating the new ones to charity. My father had to have his boots custom made because of a medical snafu so he had a lift on the left.

Everything had to be just so*.

I couldn’t sleep that night. I was mentally and emotionally exhausted and yet I couldn’t stop. Trying to sleep meant that I had no distractions and I had to face the fact that my father was gone and I wasn’t ready to do that. Instead I stayed up and went through my fathers safe and his paperwork looking for my parents marriage certificate because the funeral home needed it.

That too was bittersweet. I found all kinds of things that my father had held onto through the years. I remember making a coupon for my dad when I was like in grade three; it was for fathers’ day. He kept it all these years. I put it in his casket when I went to say my final goodbye. 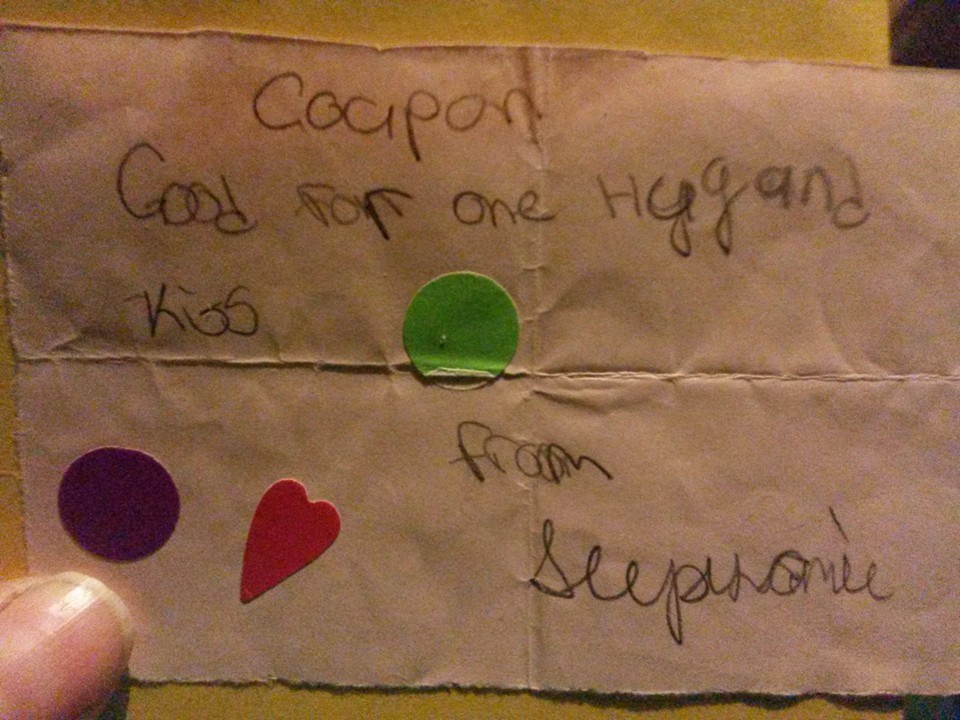 *So imagine my OCD induced horror when we went to the funeral home to say a final good bye and they had kept on the shirt that he died in and he didn’t have his hat. This was the biggest deal ever at that moment and the funeral director felt so bad that he offered to change my dad’s shirt. I’m not that unreasonable, so I kindly accepted his offer to instead fold it nicely and place it in there with him. His hat was located, Chelsea put it on him and I made sure he had his glasses. Only then did it look like him.

My father ended up with more stuff in his casket to ‘take with him into eternity’ than he usually did for a trip.