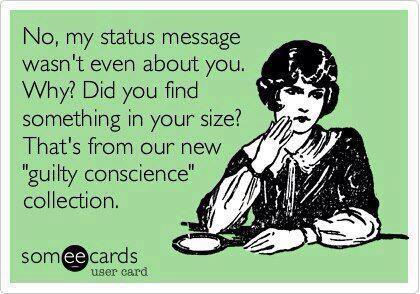 It often makes me wonder why people jump to the conclusion that anything I post is about them. Makes ME wonder what YOU have said or done behind my back that would make you feel that way. If you haven’t done me any wrong, than why are you concerning yourself with it?

I know that there is someone who is trolling Facebook and feeding information to they who shall not be named. Then they in turn twist it around and somehow manage to loose all of the meaning and trash me on Facebook. Which is fine because I blocked them long ago. Like that time I was praising someone who called me out on something I needed to be called out on. I’ve been going through life with my head up my ass since my father died. Depression sucks and it’s also very, very selfish. So no, sometimes I really have no idea that I may have hurt your feelings, unless you say something (I’m only human, sometimes i’m ignorant too). Said person is very near and dear to my heart and it’s a shame they live so far away. In any case, i’m glad that they said something. It takes guts to speak up about how you feel. I will always respect that.

Sometimes I post things because I know that someone in my ‘circle’ might find it helpful or relevant. Sometimes I just like it or it resonates with me in some way, so I share it.

Doesn’t mean it’s about you.

I also have a rule about not saying anything behind your back that I am not willing to say to your face. Which means that I don’t go out of my way to “vague book” about family and friends, especially the one’s that are on Facebook. Even I have more class than that. Although some would disagree with that.

Doesn’t matter anyway, because you guessed it: They’ll assume it’s about them. Even when it isn’t.

Makes me wonder why it’s so “obvious” to you. Makes me question your conscious once again… I mean really, if you’re taking offence to the things that I have posted or assuming they’re about you or someone you know, what have YOU done behind my back that would make you think that way?

Yet, no one sees it like that. People get all defensive and start saying things to me like i’m a hypocrite, narcissistic, a liar, childish, self centered and soooooooo many others. Yet, they themselves should take a nice, long look in the mirror.

And mind their own business while they’re at it.

If something isn’t clear, I will happily clarify. However, if you still assume that it’s about you, your family or someone you know; I once again urge you to look at the skeletons in your own closet before commenting on mine.