Couldn’t have said it better myself.  Which is precisely the feeling I’ve had pretty much all of last week.  As in, I hope this goes away, you know like yesterday?  So its been

Since Jason died, but hey, who’s keeping track?  Most days I’m pretty much OK.  Wed April 21st? Not such an OK day, nor were the days leading up to it either.  As a matter of fact, those (the days leading to) were the worst.  A few years ago Jason asked me what it was like to be 30.  I simply & honestly replied “Dude the first 6 months of being 30 were the best 6 months of my life” and they were.  On. So. Many. Levels.  He replied with something to the effect of:”I hope mine is just as good, gives me something to aim for/look forward to.  Except Jason didn’t make it to be thirty years old.  Wed April 21st 2010 was Jason’s 30th birthday.  That was a hard day.  A dark day if you will.  That whole week?  Hello depression!
I shut pretty much everyone out, I really didn’t bother to correspond with anyone if I could help it and it sucked balls.  I’m not going to lie.  You see, I had a conversation with someone not so long ago that sounded a little something like this:
Them:”I don’t ever say I’m depressed, just “sad”.
Me: “See, that pisses me off.”
Them:”Why?”
Me: “Because I am SO sick of the stigma around depression!  Sometimes you get depressed briefly, usually after a period of grief, its very common.  Also depression is a disease that affects so many people and those people sometimes don’t get help because of statements like that!  Either they’re afraid of the “social stigma” or too embarrassed or something along those lines. “
Them: “Well since you put it that way, you have a point”
I at least like to think that I do…
Jason was a diagnosed manic depressive.  It made him suicidal.  Hence my burning desire to start Jason’s memorial foundation.  These people who are suffering either briefly, or for the long term need to know that we are NOT afraid of how they feel!  Its human instinct to try and “make someone feel better” however I now know that its impossible.  Support them? Yes!  Make them feel as if they’re less alone? Absolutely!  However “feeling better” in its truest form takes time, love, support and a whole lot of patience.  I hit an all time low last week that scared the shit out of me.  Not suicidal low, just OMG I haven’t ever felt this “dark” inside in my entire life and it freaked me out.  I sought immediate help.  After doing a quick Google search I found  GROWW: Grief recovery online while this site is a bit of a pain in the ass to navigate, it was well worth the effort.
I was astounded by the amount of people in the chat room that had been affected by various deaths ranging from Cancer/heart disease.  The biggest one overall? Suicide.  That saddened me greatly.  Although I knew that I wasn’t alone (nor did I ever feel that way in that regard).  However opening up to total strangers about how your feeling and knowing that they full on can share that burden with you and understand it really helped.  After all, its the survivors that are the ones who are left to pick up the pieces after someone dies.  Now don’t get me wrong all death sucks.  No matter how you slice it.  Its going to hurt in a number of ways.  Although for me, having Jason die of Cancer, getting hit by a bus anything like that…  I would have had closure, because then at least I would have know why.  Yes I have a splendid understanding of depression, the effects and so on.  However I also happen to know of lots of people who are functioning with this terrible disease of the mind.  Overall, I get it.  However I just can’t understand it.  There are so many UN-answered questions that will plaque me for eternity.
I said to my friend Jackie once two days after his passing:”I really hope there is life after death so I can find him and kick his ass for hurting me this way.” To which she replied:”Steph, if there is such a thing as life after death, he knows how much your hurting.”  You know what I say to that? GOOD!  I want him to feel bad for hurting us all like that!  I know that sounds horrible, but when you feel the pain to the point you need to omit yourself from this earth, you need to know that there are scores of people whom you left behind that loved love you.  They also miss you terribly when your gone 🙁
I found this in the GROWW discussion board “reluctant angels” that I am going to share here:

When Someone Takes His Own Life
by
Norman Vincent Peale

In many ways, this seems to be the most tragic form of death. Often the stigma of suicide is what rests most heavily on those left behind…

The Bible warns us not to judge, if we ourselves hope to escape judgment. And I believe that this is the one area that Biblical command especially should be heeded. For how do we know how many valiant battles such a person may have fought and won before he loses that one particular battle? And is it fair that all the good acts and impulses of such a person should be forgotten or blotted out by his final tragic act?

I think our reaction should be one of love and pity, not of condemnation. Perhaps the person was not thinking clearly in his final moments; perhaps he was so driven by emotional whirlwinds that he was incapable of thinking at all. This is terribly sad. But surely it is understandable. All of us have moments when we lose control of ourselves, flashes of temper, or irritation, or selfishness that we later regret. Each one of us, probably, has a final breaking point – or would have if our faith did not sustain us. Life puts far more pressure on some of us than it does on others. Some people have more stamina than others…

My heart goes out to those who are left behind, because I know they suffer terribly…The immediate family of the victim is left wide open to tidal waves of guilt: “What did I fail to do that I should have done? What did I do that was wrong?” To such grieving persons I can only say, “Lift up your heads and your hearts. Surely you did your best. And surely the loved one who is gone did his best, for as long as he could. Remember, now, that his battles and torments are over. Do not judge him, and do not presume to fathom the mind of God where this one of His children is concerned.”

A few years ago, when a young man died by his own hand, a service for him was conducted by his pastor, the Reverend West Stephens. What he said that day expresses far more eloquently than I can, the message that I’m trying to convey. Here are some of his words:

“Our friend died on his own battlefield. He was killed in action fighting a civil war. He fought against adversaries that were as real to him as his casket is real to us. They were powerful adversaries. They took toll of his energies and endurance. They exhausted the last vestiges of his courage and his strength. At last these adversaries overwhelmed him. And it appeared
that he had lost the war. But did he? I see a host of victories that he has won!

“For one thing – he has won our admiration – because even if he lost the war, we give him credit for his bravery on the battlefield. And we give him credit for the courage and pride and hope that he used as his weapons as long as he could. We shall remember not his death, but his daily victories gained through his kindnesses and thoughtfulness, through his love for his family and friends…for all things beautiful, lovely, and honorable. We shall remember not his last day of defeat, but we shall remember the many days that he was victorious over overwhelming odds. We shall remember not the years we thought he had left, but the intensity with which he lived the
years that he had. Only God knows what this child of His suffered in the silent skirmishes that took place in his soul. But our consolation is that God does know, and understands.”

I’m far from religious, but this gave me some comfort and put things into a different perspective.  When Jason’s ashes arrive along with his lovely mom, I have decided that St. Anne’s MTL (its on the West Island, not a church)  is the best/most ideal/nicest location to lay Jason to his final resting place.  So does the ability I have to pay it forward.  I have discovered therapy in art.  According to him, I’m his favorite artist.  I think that’s hilarious, but hey as long as he likes it right?  I am grateful for him letting me express myself in a different medium.  Its made me feel useful again and helped me gain back some creativity that I feel I have lost somewhere along the line.  Also assisting Reach for the stars rescue as a volunteer, which in turn not only takes some of the pressure off of Jacquie who has 1 million things to do, it helps homeless animals which in turn helps me.  Mostly to become a better person, but also to pay it forward to those who have less then I do.  So once I set up and get the ball rolling for Jason’s foundation, part of the money I raise will be used to sponsor dogs for specialized training to become “therapy” dogs.
Animals have been proven time and time again to have therapeutic qualities.  It will also hopefully/maybe stop some of these poor animals from being euthanized.  Reach for the stars of course is no kill as are a majority of rescue operations.  In the meantime, I’m just going to do what I can to help in any way I can and so is he which is wonderful.  I’m pretty grateful to have him in my life at this point.  Not in a co-dependent kind-of-way, more so in a: you happened to step into my life at just the right moment kind of way.  Due to my allergies, I had to give up my fur kids Xavier & Caya which broke my heart on a number of levels.  I however get to share Bandit with him and that’s beyond awesome.
Oh hey look! PICTURES! 🙂 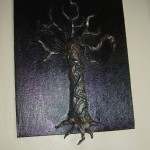 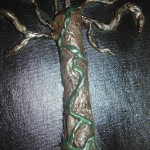 Close up of le tree 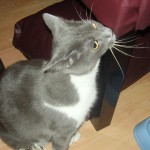 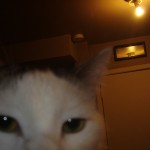 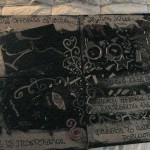 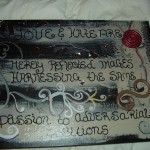 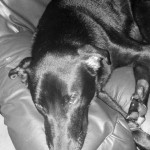 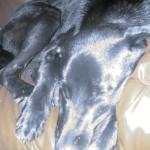 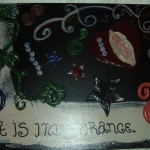 Bottom right: It is indifferance. 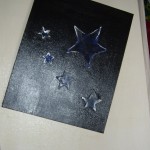 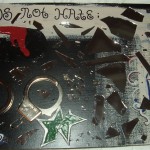 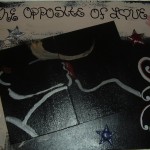 The opposite of love,

One thought on “Depression, a boy & his puppy, oh and art.”