Not entirely relevant to this post per se but a fun little fact just the same.

An interesting thing happened the other day and it was completely by chance.  It also goes to show you that some people no matter how ‘book smart’ they are, are really, really fucking stupid yo!

It happened a little something like this while we were waiting to meet with one of Nick’s friends from high school:

Nick: Babe, I forgot my phone at home.

Me: Do you recall anyone’s phone number off the top of your head?

Nick: No, of course not. Blah blah blah…

Me: OK well lucky for you, I have data on my phone, i’ll just reply to the  e-mail so that everyone will have my cell number in case someone needs to get in touch with us.

Nick: Oh well in that case, check and see if so and so’s number is in there would you?  It should be in the e-mail that was sent out.  We can just call him and get M’s number from him.

So there I am, scrolling through a pile of e-mails that were sent to pretty much everyone when it became clear to me that they were ‘piggy backing’ off of an old thread from a previously planned get together.  Someone wasn’t too bright in doing so because my eye happened to fall upon this from one of Nick’s so called good friends e-mail reply…

“Should we invite Nick?  Maybe he can bring his hot new girlfriend.  Just kidding, unless you’re into that sort of thing”

Since when am I a fucking thing?

Listen ass bag, first of all I am A. FUCKING. PERSON. A kick ass one at at.

Secondly: When you’re sending out an e-mail blast perhaps you should start a shiny new composition?  You know the shiny new one that DOES NOT have you making derogatory remarks about your friends girlfriend?  Even more so when said friend and his girlfriend are included in said e-mail recipients.

See I personally don’t give a shit what you think of me.  I know that I am not for everyone and that’s fine.  Because let’s face it honey, I wouldn’t tap that (you) if you were the last offering left on earth, so as far as that’s concerned I suppose the feeling is mutual?  I’m clearly not your type judging by your wife, (who is lovely by the way) we’re complete and utter opposites of each other.

You know what ISN’T OK?

The way you betrayed someone who thought you were a better friend than that.

I will not loose any sleep over your small minded opinion of me, nor will I let your poor judgement(s) of myself color my self worth in anyway either.

My boyfriend on the other hand?

He’s amazing and he deserves much, much better than that.

He was far, far more tactful than I would ever be when he pointed this indiscretion out to you.  And yet you don’t have the balls to say anything for yourself.

So honey if you are going to throw stone’s from your glass house, put some clothes on.  Your vagina is showing.

Today I can honestly and truly say that I have never been more proud of you than I am right at this moment.  Today you graduated from your rec & leisure program at Conestoga college.

I remember when mom told me that you were planning on taking the plunge and going to college.  No easy feat for most people, let alone a single mom with two kids.

Through the years I’ve seen you face numerous obstacles, more than I think the average person would, let alone should endure in a single lifetime.  I’ve seen you beyond frustrated because of the challenges that life has thrown at you.

I’ve seen your victorious glory on the rare occasions that you caught a break.  I have seen the pride in your eyes when you held both of your children in your arms.  I’ve chased down douche bag boyfriends down the street with sharp objects because they had the audacity to talk shit about you and the fact that you have epilepsy.  I’ve seen you fight to have acceptance and work your ass off to get an education so that you can get ahead in life.

I’ve always admired you and respected you.  More than I think you are aware…

I hope that today, you can look back on this and think back to all the hard work you’ve endured and know that it’s worth it.  Life is hard, I’ve worked in one of the most sexist industries for the past 21 years and through it all, so many people told me to give it up because I would never make it.

Don’t ever let the bastards get you down big sister and don’t ever let someone tell you that can’t.  If they do, there’s only one thing that you should do:

I regret not being home to share in your glory with you.  Just know that everyone knew just how proud I was of you today, even though today is *my* birthday.  I’ll let it go this time 😉 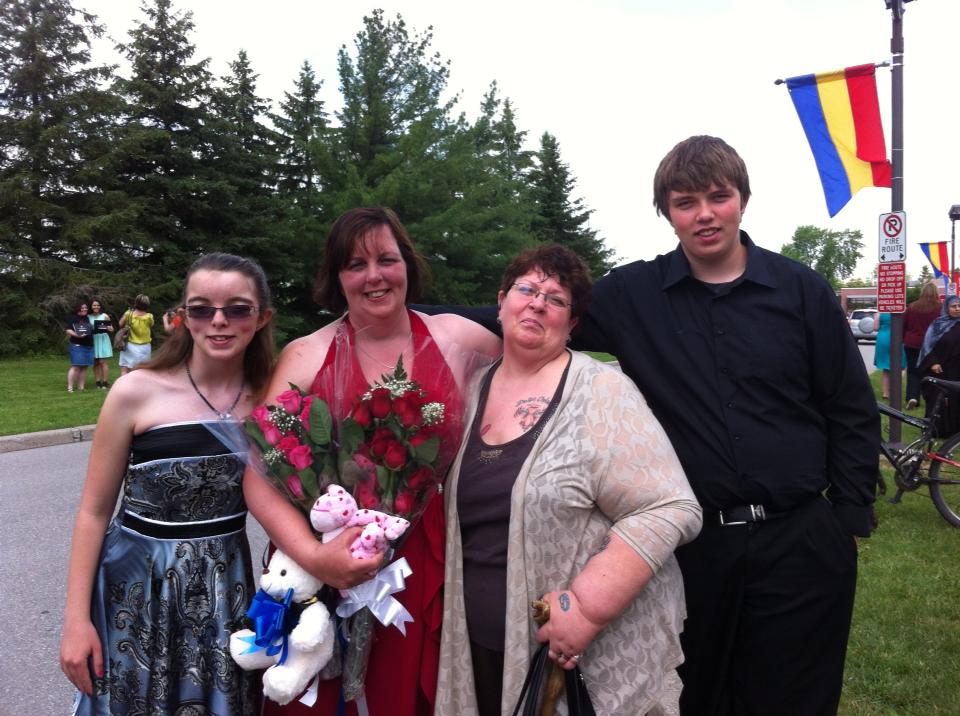