Before I totally ruin your day/appetite allow me to introduce you to the new man in my life  🙂  His name is Shamrock, he’s pretty awesome & I only have him for a limited time.  This adorable bundle of cute was surrendered by his owner who moved to Singapore for 5 years and couldn’t afford the 10 grand (yes, ten thousand dollars) to have him tag along.  After having Anna step in and save him literally hours from being gassed, he’s a pretty happy boy: 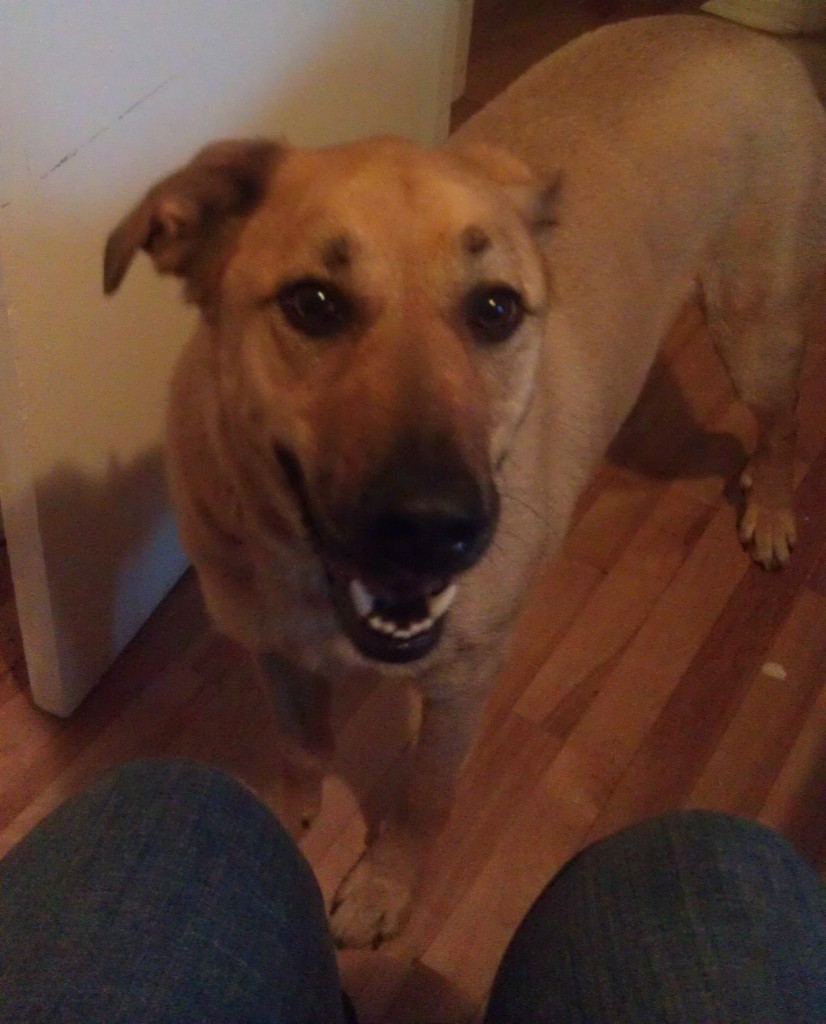 Handsome little man isn’t he?  He smiles like that ALL the time.  I do adore him & he’s cute/funny/sweet company but sadly I can’t offer him the kind of home that he needs for the long term.  I KNOW this & I wish people would stop telling me that I should keep him when I know that I can’t.  I do OK on my own, but I do enjoy my freedom and not only that his food/toys/vet bills are being either donated and/or paid for by someone else.  Unlike some people who adopt animals, I do have a realistic approach to this situation.  I do hope that he finds a good forever home soon, he deserves it!

I cancelled my account on a certain site.  Clearly in a moment of what can only be described as sheer stupidity (one of which I have 0 recollection of) I apparently gave someone my e-mail address.  Well not the one I use on a day to day basis mind you.  The I might get back to you but likely not e-mail address.  You know the one where you just use your initals or some odd ball variation of your name.

We all have one of those.

So I rarely check this account and there is this e-mail from someone who said why did you cancel your account on (insert site name here)?  I thought to myself who the fuck are you?  I almost never use that e-mail anymore for anything and I know that I haven’t given it out in a really long time because of it.  Furthermore, I don’t date red heads.

Yes I am a natural red head, however so is my father (ick) and I quite simply do not find it attractive in any way shape or form.  Redheaded woman are smoking hot, men yeahhhhhhh not so much…

Anyway back to the story at hand.  There’s a file attachment.  No big deal, could be his face for all I know and I was   praying to anyone who would listen that that’s all it was.  Except I was wrong and I of course had to open the e-mail itself.  G-Mail of course provides you with a decent sized thumbnail of what that attachment is. 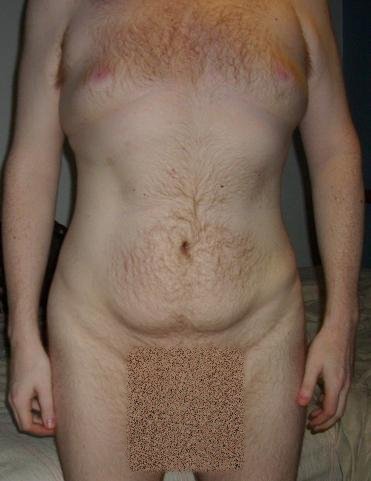 This was edited by moi. You're welcome!

I threw up in my mouth a little.  I actually thought that I was going to vomit my dinner all over my desk in a projectile fashion.  So of course I had to share the horror.  Which garnered the following responses:

The worst part of all:

He e-mailed me again and asked me if I liked the picture and SENT IT TO ME AGAIN!  I am scarred for life now!  I am tempted to write him back and say: “I’m sorry, I can’t tell you because after the last one that you sent me, I gouged out my eyes with a rusty nail and I have scheduled a lobotomy to forever block out this incident in all of it’s entirety.

Here’s what slays me, in this day and age a lot of people utilize online dating websites.  It’s a lot more convient then to bother going to all the trouble of trying to meet someone in person.  Most people won’t own up to this though.  Every single guy I know who uses a popular (and free) dating site, the conversation always starts with: A buddy of mine set up a profile for me and I met this woman…  Online dating, the hidden shame of us all.  It is however, not without it’s pitfalls…

I get a lot of messages depending on what category I place myself in.  I’ve tested this theory out and the most attention grabbing (and also garnered the creepiest replies) was of course ‘intimate encounters’ a close second although not nearly as popular was dating.  Haven’t ever bothered with a long term commitment, figure my in-box would look like a ghost town and that’s not really what I’m after from the get go anyway…  The whole hang out/e-mail talk thing hasn’t ever been an option I’ve chosen, nor activity partner.  I figure intimate encounters pretty much covers this, after all sex is an activity right?

Of course it is!

Anyway…  Online there’s no consequences, or at the very least not very many.  I personally keep my profile pretty brief and to the point.  Most people these days have short attention spans.  That being said:

Don’t write a fucking novel!  Jesus Christ.  It’s one thing to write a well thought out profile that show cases your highlights.  More often then not though, they usually start with something like OMG I am SO bad at talking about myself lulz and then they proceed to write their life stories, the cliff notes edition.

Use proper grammar and spelling!  Jesus Christ!  Is it really that difficult to spell out an entire word?  You know instead of U how about adding those three extra letters.  OR PEOPLE WHO TYPE LIKE THIS -or- my personal favorite LiKe THsI.  I had a discussion about this with someone last night.  Not bothering to use proper spelling and or grammar makes you look like a fucking idiot who didn’t make it past grade 2.

Private messages: It’s one thing to drop someone a quick word or five to open up the line’s of communication.  However it is in poor taste to write a message to someone that is another novel that highlights your income, the kind of car that you drive and blah fucking blah.  You know what that says to a woman like me?  I’m insecure and I’ll buy you everything that you want because I’m really trying to buy your love because dammit I need someone to love me. Or that you’re a materialistic douche bag.  Either way? Do. Not. Want.  Real woman who will like you for you and you alone, don’t need to know your entire pedigree.  We’re not buying a dog.

Comments on my pictures and or  my tattoos:  Yes I am pretty to most people, thank you.  However saying: ‘Yeah but you’re really hot, you must not be having any problems getting laid” Well not usually no I don’t.  However I don’t need you to point that out.  Proves to me that you’re terribly, terribly insecure.

Saying you want to lick all of my tattoos is not a turn on.  I have 27 and they’re essentially all over the place.  Yes I do have my naughty bits tattooed (and pierced) also my butt cheek, along with one on my big toe and I’m sporting one in my left armpit among other places.  Do you really want to lick my armpit?  Furthermore do *I* want you to lick my armpit?  No.  No I do not.  What are you a dog?  Do I need a bath?  Do you feel that my skin is dry and I should drink more water and or up the ante on my moisturizer?  So just don’t.  It’s NOT attractive and makes you look like a douchebag.

YOUR pictures: The whole point about dating period is all about looking to score.  Regardless of what you want, we’re all searching for something or someone.  Perhaps you’ll get lucky and actually find it.  So naturally no one isn’t going to post pictures of themselves looking anything less then their best usually.  Most guys do OK in this department.  Here’s what’s not OK (in my eyes at least)

The caption: a sneak peek at my physique.  You want to know what I see:

Pictures of your junk: Most guys assume that if you place yourself in the intimate encounters category, you automatically want a picture of their cock.  No, no I don’t actually.  Why?  Because I, unlike most people have professional pictures of mine.  Thank you Hylton!  I happen to have a really awesome, rock star vag.  That aside, I am also a Chef.  I’m a very visual person in that regard (not unlike most men) and to coin a phrase from someone: “I eat with my eyes first” and that’s true!  So when you send a girl a picture of your junk and it’s not up to par.  I’m going to judge your sorry ass!  I won’t post pictures of some of the  genitals I’ve gotten lately but I will tell you this much.  Make. An. Effort.  I personally haven’t ever been with a guy who isn’t cut and after seeing the latest, I really don’t want to.  Not trying to be all judgmental, however not one of you is selling me on it.  Really you’re not, not in the least.

Save for one.  I’m giving him a medal, only because I feel that he deserves one.  As a general rule of thumb, best not to send a picture of your junk unless she asks for it.  It’re pretty damn presumptuous of you to assume that we want to see it.  Also your definition of well endowed can likely vary vastly from mine and on a final note if your going to take a self shot, best not to do it when looking down.  Why?  Because when I look down at my chest, it’s not nearly as large as it actually is.  Ergo, you’re selling yourself short (pun is totally intended).

So if you’re going to create an online profile looking to score, might want to keep some of these points in mind.  Men judge woman based on many, many things and you know what? We do the same.