It’s that time of year again!

I keep seeing cheeky meme’s such as this on social media: 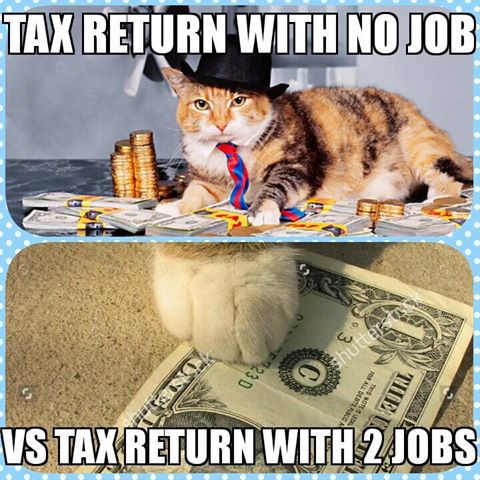 I hate to disappoint you, but that’s not how it works…

In order to actually get a tax return, you need to pay income tax.

I just did my taxes for 2015 and you want to know how much i’m getting back?

In spite of having limited income, being a student (with almost 3 grand in tuition costs), buying bus passes, donating to charity and more, I get nothing.
Because I didn’t pay that much into income tax or anything that is considered a write off last year to generate a refund.
So no being poor AF or being a student doesn’t automatically generate some sort of huge windfall during tax time.
In fact, you get nothing.
Just in case you weren’t aware. You are now.

I willingly allow people to inflict pain upon me and even worse, I pay them to do it.  I am of course talking about my tattoo artists and my dentist.

Tim & Gil, they know how stubborn and hardcore I am when it comes to my tattoos.  For me, getting tattooed is about as close to a spiritual moment I can get.  I could go on and on about my tattoos, but I do that enough already.  In any case, I get to pick and choose my tattoos, the placement, the location. The whole 9.

My dental work however is a whole other story. I make a commendable effort to take care of my teeth.  Especially given the thousands of dollars I’ve currently invested in them as of late.  So last time when I went on a dental shopping spree of sorts, my dentist asked me the one question I feel everyone should dread:

How high is your pain tolerance?

You see, I was getting some repair work done on one of my front teeth.  She didn’t want to give me the Novocaine shot if she could help it, said it wasn’t pleasant.  So I thought that having a fairly high pain tolerance, I could take it.  Well turns out that she was closer to the nerve than I was aware of  and once the tears started streaming down my face in a silent homage to pain, because tooth pain sucks balls on so many levels; I had to cave and ask for the Novocaine.  Which normally isn’t too bad.  However getting a shot of Novocaine on the very front of your face?

OMFG…  I could feel that needle underneath my right eye.  Most disturbing feeling ever!  Also? My sinuses and half my face were frozen solid for the better part of three hours. Always a good time!  So when I recently discovered the beginnings of a small cavity on another tooth, I got my ass into her office right away.  The faster you get these things fixed, the less it hurts later.  I am of course talking about you and your bank account.  So there’s an x-ray taken and she’s all, oh it’s small, you don’t need any Novocaine.

Um sure…  That’s what you said last time dentist of mine!  Except this time it wasn’t too bad.  It sucked a little bit, not going to lie.  I do however now have bragging rights:

I got a filling with no Novocaine. Take that bitches!

for punching you in the face.

I read this article via a friend on FB, who copied it from views from the couch and I’m posting it here.  I feel that this is something that needs to be read.  As someone who works in a daycare I see several incidents of children from both genders acting aggressively.  Regardless of that, there is a valid point in this post.

“On a somewhat serious note today because of a conversation the other day:
I am sure every girl can recall, at least once as a child, coming home and telling their parents, uncle, aunt or grandparent about a boy who had pulled her hair, hit her, teased her, pushed her or committed some other playground crime. I will bet money that most of those, if not all, will tell you that they were told “Oh, that just means he likes you”. I never really thought much about it before having a daughter of my own. I find it appalling that this line of bullshit is still being fed to young children. Look, if you want to tell your child that being verbally and/or physically abused is an acceptable sign of affection, I urge you to rethink your parenting strategy. If you try and feed MY daughter that crap, you better bring protective gear because I am going to shower you with the brand of “affection” you are endorsing.

When the fuck was it decided that we should start teaching our daughters to accept being belittled, disrespected and abused as endearing treatment? And we have the audacity to wonder why women stay in abusive relationships? How did society become so oblivious to the fact that we were conditioning our daughters to endure abusive treatment, much less view it as romantic overtures? Is this where the phrase “hitting on girls” comes from? Well, here is a tip: Save the “it’s so cute when he gets hateful/physical with her because it means he loves her” asshattery for your own kids, not mine. While you’re at it, keep them away from my kids until you decide to teach them respect and boundaries.

For now, I want my daughter to know that if someone is verbally harassing her, she should tell the teacher and if the teacher does nothing, she should tell me. If someone physically touches her, tell the teacher then, if it continues, to yell, “STOP TOUCHING/PUNCHING/PUSHING ME” in the middle of class or the hallway, then tell me. Last year, one little boy stole her silly bandz from her. He just grabbed her and yanked a handful of them off of her wrist. When I went to the school to address the incident, the teacher smiled and explained it away to her, in front of me, “he probably has a crush on you”. Okay, the boy walked up to my daughter, grabbed and held her by the arm and forcibly removed her bracelets from her as she struggled and you want to convince her that she should be flattered? Fuck off. I am going to punch you in the face but I hope you realize it is just my way of thanking you for the great advice you gave my daughter. If these same advice givers’ sons came home crying because another male classmate was pushing them, pulling their hair, hitting them or calling them names, I would bet dollars to donuts they would tell him to defend themselves and kick the kid’s ass, if necessary. They sure as shit wouldn’t say, “he probably just wants a play date”.

I will teach my daughter to accept nothing less than respect. Anyone who hurts her physically or emotionally doesn’t deserve her respect, friendship or love. I will teach my boys the same thing as well as the fact that hitting on girls doesn’t involve hitting girls. I can’t teach my daughter to respect herself if I am teaching her that no one else has to respect her. I can’t raise sons that respect women, if I teach them that bullying is a valid expression of affection.

The next time that someone offers up that little “secret” to my daughter, I am going to slap the person across the face and yell, “I LOVE YOU”.”

OK so bear in mind I had a major fat kid vacation so my healthier habits basically went into the toilet.  As a result I’m making a conscious effort to do a little better.  One of those things would be to consume more water, I’m tired of feeling lethargic and dehydrated.  So this is a good thing, having to pee all the time, not so much.  As a result of this, this conversation happened today at work.

Me: Good lord, I need to pee again!

Co-worker: Happens to people who are pregnant.

C0-worker: Sure it is, my friend got pregnant and she was on the pill.

Me: (laughing) No (insert co-workers name here), I can’t get pregnant because I don’t have anyone to have sex with.

We both had a good laugh over the whole thing.  Maybe you just had to be there?